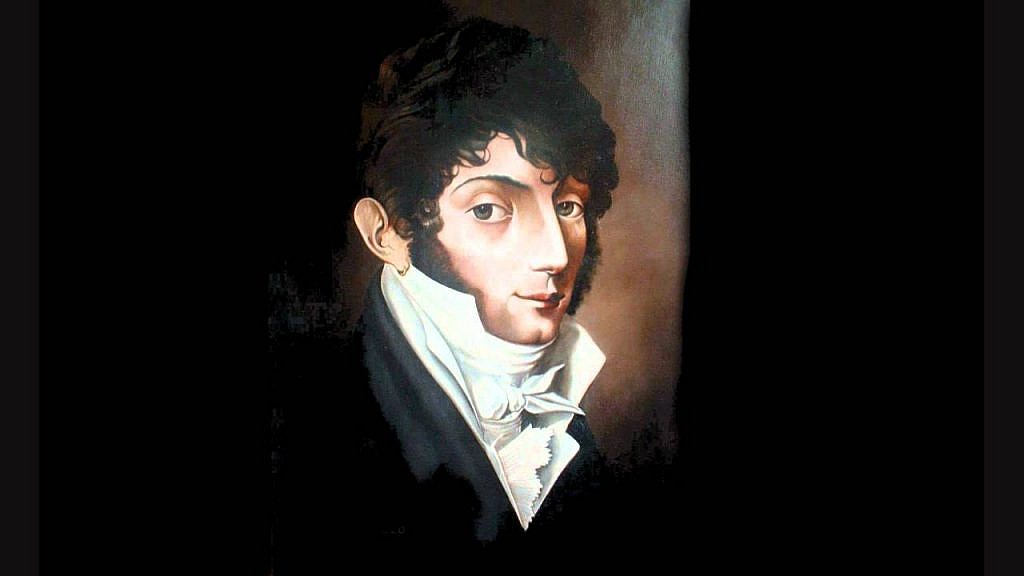 Mauro Giuliani, guitar virtuoso, heir to the lutenists of old, friend of Beethoven and Rossini, composed concerti, chamber music, and songs, as well as guitar solos and duets.

Mauro Giuliani was born in Bisceglie, a small town on the Adriatic coast of Italy not far from Bari, in 1781. In about 1806 he arrived in Vienna and immediately made a huge impression as a guitar virtuoso, composing and publishing there his first and most famous guitar concerto and many other works. A witness who heard him play at this time wrote: “he played so perfectly that he frequently called to mind the marvellous old era of genuine lute-playing”.

I think that those words give a clue to approaching this music in terms of the lighter early 19th century instrument, with its clear sound and lower string tension: virtuoso playing with cascades of notes on the upper strings and lyrical passages on the lower ones: brilliant and dazzling music. Of course today’s instrument can play Giuliani’s music, but today’s instrument has greater weight and greater string tension. I used to play this music often on a Lacote of about 1830, with gut strings and without nails, and I can testify to the greater flexibility and immediate response which it offered.

What is Giuliani’s achievement as a composer? It falls into several periods. First are the virtuoso pieces of the time when he had first arrived, from about 1808 to 1812. Then (without a clear break) the period of consolidation in Vienna when he composed hundreds of pieces, his second and third concertos and many songs and pieces for guitar and flute or violin. Finally, the music composed after he left Vienna for Italy in 1819. Let us look at these in turn.

I am writing this piece as the editor of all of Giuliani’s music – and I mean all, without exception. Back in 1981-83 I did extensive bibliographical work starting from Thomas Heck’s invaluable Yale thesis The Birth of the Classic Guitar (1970). I obtained copies of all the early editions (and that means many, many thousands of pages of them). Librarians all over the world were tremendously helpful. Some copies came even from the then Yugoslavia. Some arrived soaked in the rain (unprotected alas by the British Post Office). I sorted out which editions were the primary sources. There were a good many additions to Heck. I then published all Giuliani’s music, every piece with new bibliographical notes establishing the original text and often giving lists of suggestions for performance – while making absolutely clear that any such lists were only a starting point for performers. All the 39 volumes are still easily available to performers and scholars today from my firm Tecla Editions and many pieces are available individually. The references in this small essay are to that edition, the Complete Works of Giuliani.

First, Giuliani’s early and virtuoso period. He composed a Sonata for solo guitar, op. 15; his first concerto, op. 30; and his Studio for the guitar, a tutor which was much prized and whose right and left hand exercises have never ceased to be used since that time.

After that brilliant beginning, Giuliani settled down to composing steadily for many years in Vienna. He moved in the thick of Viennese musical society: Beethoven, Hummel, Mayseder, etc. He played (apparently the cello) in Beethoven’s Seventh Symphony in 1814. There is no sharp dividing line between the first period and this one, but one could say that this second period has two characteristics. First, it is a consolidation: an achievement which established Giuliani as the principal guitarist in Vienna and one with a serious and solid reputation. Secondly, it established him as an all-round musician, as a composer not only for the guitar but for guitar and flute or violin, guitar and voice, as well as two more guitar concertos. From this period is his Grande Ouverture in the Italian style.

During all this time, he had Italian influence on his music. Now in 1819 he left Vienna for Italy, first to Venice. In this later period he composed some fine works. Particularly strong was the influence of Rossini. There are his Rossiniane, which are fine potpourris based on themes from Rossini, and splendid arrangements for two guitars of overtures to Rossini operas. Others are strongly Italian as well, such as the Potpourri Nazionale Romano op. 108 or the Variations on Neapolitan folksongs opp. 140 etc. These later works are not often played today but would repay attention.

I come back to the question: what is Giuliani’s achievement? It’s more than just historical: this is tremendous, virtuoso music. Personally, I hear something akin to a fortepiano played with great energy, lightness and musicality: nothing heavy at all. Surely the Dutchman had the right insight when he wrote that this musician recalled to him the lutenists who had gone before.