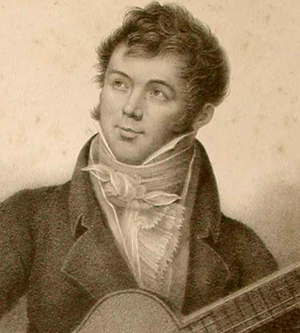 Fernando Sor, one of the great figures in the history of the guitar, was an all-round musician and composer. Although he was acknowledged in his lifetime as a fine performer on the guitar, he was not associated with that instrument as strongly as was, for example, Giuliani. He had been a chorister at the monastery of Montserrat (near Barcelona), where he received an education in church music and composition and in orchestral playing, and later in life he composed music not only for the guitar but also for voice, piano, orchestra, etc.

Until 1813 (when he was 35) he lived entirely in Spain. He composed seguidillas there for voice and guitar (some with piano), symphonies, operas, and some guitar music such as the famous sonata now known as Grand Solo, op. 14. He fought in the war in Spain 1808 to 1814 and was the principal composer of military and political songs in that war, of which the best known are “Venid, vencedores” and “Vivir en cadenas”. A big new discovery is “Corone la victoria”, a song by Sor celebrating the Spanish victory at the Battle of Bailén in 1808 for chorus of four voices, wind and strings, of which I have made a score for publication soon and which was performed at Bailén itself from my edition in June 2008.

After a brief stay in Paris in 1813, Sor settled in London where he published his marvellous and justly celebrated set of studies now known as op. 6, the Variations on a Theme of Mozart, and many other works such as Italian arietts for voice and piano. A journey to Moscow followed and Sor then spent the rest of his life in Paris. He became a teacher of the guitar and it was there that he composed the many works for beginners on the guitar – opp. 31, 35, and 60 – which have been called the finest works ever written for beginners on the instrument. I published all his studies and works for beginners in a modern re-engraved edition called Sor’s Complete Studies, Lessons, and Exercises (Tecla 101), and also the English translation of his Method.

Sor’s reputation has rested on his guitar music, and my re-engraved critical edition, the New Complete Works for Guitar in eleven volumes, is now available. The biography of Sor can be read in my book Fernando Sor, Composer and Guitarist, and many other titles by him including his Seguidillas and Seguidillas Book 2, and the complete Italian arietts,  are also available.

Fernando Sor life and music – a longer and more detailed biography based on my book Fernando Sor Composer and Guitarist.