Doing what I (and Tecla) can for the planet

The clear stream outside London where as a child I saw water-spiders skimming on the water surface and amazing leeches in the stream, is now a ditch without life. In the beautiful Spanish village deep in the countryside where the Tecla warehouse now is I used to see glow-worms (luciérnagas) only five or six years ago as I walked up the hill at night. Their habitat is still there, an ancient wall (it’s just behind the house in the picture), but I haven’t seen the glow-worms for the past six years or so – were they killed off by acid rain? 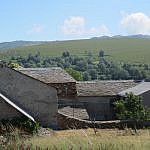 I used to see wonderful giant toads in the village, but I haven’t seen them for many years.

People who knew the village a long time ago tell me that there used to be many frogs, but you don’t hear any now.

There is no industry nearby so it looks to me as though there must be poison in the air, in the rain, or on the earth.

I don’t have as long a future as the sixteen-year-olds who are so splendidly working for the environment, but I do still have a future and I’m doing what I can to help.

Tecla distributes what I hope is useful information, and there are two ways to do that: as digital files, or as printed books. Digital files damage the planet less than sending books, because books involve cutting down trees to make paper to make books which are then loaded into airplanes to take them all over the world. So I have made nearly all the Tecla publications now available as digital files obtainable at the Tecla website. Do order them as digital if you would like to. For the time being you can still also order our printed editions, but I won’t be developing printed much in the future, it will be digital.

Have you seen the colossal cargo planes at airports? Much of that cargo could certainly go by surface and that would immediately be a huge benefit. One single transatlantic plane trip can use 150,000 litres of fuel. 150,000 litres??! One useful step would be for national post offices and carriers the world over to offer slower and cheaper shipping guaranteed to go by surface (train, lorry or ship) and not by air. Train, lorry or ship cause far less damage to the planet than air. But the postal services don’t offer that. If you agree with me, write to your senator, deputy etc and get them to pressure central government (EU, USA, etc) to get it put in place. I’d be pleased to ship Tecla books by such a scheme.